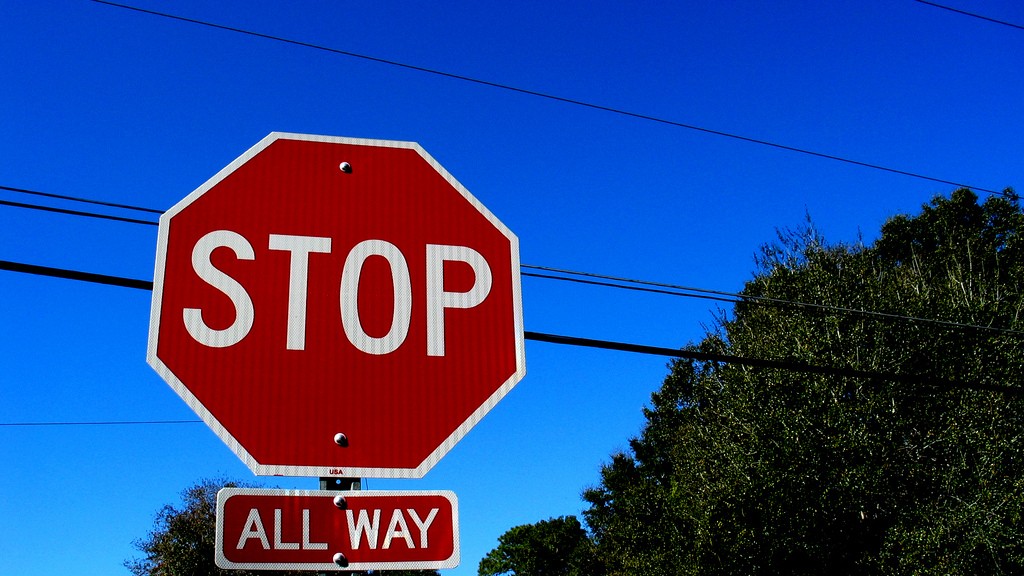 Four-way stops, also called all-way stops, are when there are stop signs for traffic coming from all directions. No street’s traffic has priority, all must stop.

First to Stop, First to Go
Each car must stop before the stop line or the crosswalk. In general, the driver who was stopped first gets to go first. And this means stopped at the stop line first. If you were behind a couple of other cars at the stop sign and a car pulls up from another direction with no cars in front of it before you get up to the stop sign, they will get to go before you.

Confusion happens when two cars reach the stop sign at the same time. If they are across from each other (traveling parallel, but in opposite directions) and going straight, they can both go after making a complete stop. They can also both go if one or both are making right turns.

Straight Traffic Goes First
If both cars are taking a left turn, they may both go after making a complete stop. In this case and the ones above, neither car crosses the path of the other car, but, if one car is turning left while the other is going straight, that turning car would have to cross the path of the other car. In this case, the car going straight has the right-of-way and goes first. After that car goes, the car that needs to turn may go.

Farthest to the Right Goes First
If two cars reach the stop sign at the same time from perpendicular directions (the other car is on the road to the right or left of you), then the car to the right goes first. If the other car is to your left, woohoo, it’s your turn to go first. If there are more than two cars, the one that’s farthest to the right goes first, then it goes around in a clockwise direction, just like you’re dealing cards.

When you pull up to the stop sign, always try to make eye contact with the other driver. (This may not work in all countries. In some places, making eye contact is the same as ceding the right of way.) That way you know if the driver is paying attention and you will be quicker to notice if they decide to go out of turn. Going out of turn will make them an asshole, but your alertness may prevent you from hitting or being hit by them. That means they’re an asshole on their way to annoy other people instead of being an asshole that you, the police, and your insurance company have to deal with.