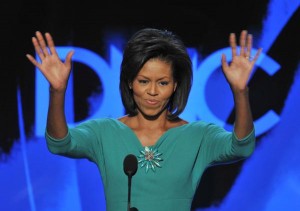 As you might imagine, for Barack, running for president is nothing compared to that first game of basketball with my brother, Craig.

I can’t tell you how much it means to have Craig and my mom here tonight. Like Craig, I can feel my dad looking down on us, just as I’ve felt his presence in every grace-filled moment of my life.

And he’s been there for me every step of the way since that clear February day 19 months ago, when – with little more than our faith in each other and a hunger for change – we joined my husband, Barack Obama, on the improbable journey that’s brought us to this moment.

But each of us also comes here tonight by way of our own improbable journey.

I come here tonight as a sister, blessed with a brother who is my mentor, my protector and my lifelong friend.

I come here as a wife who loves my husband and believes he will be an extraordinary president.

And I come here as a daughter – raised on the South Side of Chicago by a father who was a blue-collar city worker and a mother who stayed at home with my brother and me. My mother’s love has always been a sustaining force for our family, and one of my greatest joys is seeing her integrity, her compassion and her intelligence reflected in my own daughters.

My dad was our rock. Although he was diagnosed with multiple sclerosis in his early 30s, he was our provider, our champion, our hero. As he got sicker, it got harder for him to walk, it took him longer to get dressed in the morning. But if he was in pain, he never let on. He never stopped smiling and laughing – even while struggling to button his shirt, even while using two canes to get himself across the room to give my mom a kiss. He just woke up a little earlier and worked a little harder.

He and my mom poured everything they had into me and Craig. It was the greatest gift a child can receive: never doubting for a single minute that you’re loved, and cherished, and have a place in this world. And thanks to their faith and hard work, we both were able to go on to college. So I know firsthand from their lives – and mine – that the American dream endures.

And you know, what struck me when I first met Barack was that even though he had this funny name, even though he’d grown up all the way across the continent in Hawaii, his family was so much like mine. He was raised by grandparents who were working-class folks just like my parents, and by a single mother who struggled to pay the bills just like we did. Like my family, they scrimped and saved so that he could have opportunities they never had themselves. And Barack and I were raised with so many of the same values: that you work hard for what you want in life; that your word is your bond and you do what you say you’re going to do; that you treat people with dignity and respect, even if you don’t know them, and even if you don’t agree with them.

And as our friendship grew, and I learned more about Barack, he introduced me to the work he’d done when he first moved to Chicago after college. Instead of heading to Wall Street, Barack had gone to work in neighborhoods devastated when steel plants shut down and jobs dried up. And he’d been invited back to speak to people from those neighborhoods about how to rebuild their community.

The people gathered together that day were ordinary folks doing the best they could to build a good life. They were parents living paycheck to paycheck; grandparents trying to get by on a fixed income; men frustrated that they couldn’t support their families after their jobs disappeared. Those folks weren’t asking for a handout or a shortcut. They were ready to work – they wanted to contribute. They believed – like you and I believe – that America should be a place where you can make it if you try.

Barack stood up that day, and spoke words that have stayed with me ever since. He talked about “The world as it is” and “The world as it should be.” And he said that all too often, we accept the distance between the two, and settle for the world as it is – even when it doesn’t reflect our values and aspirations. But he reminded us that we know what our world should look like. We know what fairness and justice and opportunity look like. And he urged us to believe in ourselves – to find the strength within ourselves to strive for the world as it should be. And isn’t that the great American story?

It’s the story of men and women gathered in churches and union halls, in town squares and high school gyms – people who stood up and marched and risked everything they had – refusing to settle, determined to mold our future into the shape of our ideals.

It is because of their will and determination that this week, we celebrate two anniversaries: the 88th anniversary of women winning the right to vote, and the 45th anniversary of that hot summer day when [Dr. Martin Luther King Jr.] lifted our sights and our hearts with his dream for our nation.

I stand here today at the crosscurrents of that history – knowing that my piece of the American dream is a blessing hard won by those who came before me. All of them driven by the same conviction that drove my dad to get up an hour early each day to painstakingly dress himself for work. The same conviction that drives the men and women I’ve met all across this country:

People who work the day shift, kiss their kids goodnight, and head out for the night shift – without disappointment, without regret – that goodnight kiss a reminder of everything they’re working for.

The military families who say grace each night with an empty seat at the table. The servicemen and women who love this country so much, they leave those they love most to defend it.

The young people across America serving our communities – teaching children, cleaning up neighborhoods, caring for the least among us each and every day.

People like Hillary Clinton, who put those 18 million cracks in the glass ceiling, so that our daughters – and sons – can dream a little bigger and aim a little higher.

People like Joe Biden, who’s never forgotten where he came from and never stopped fighting for folks who work long hours and face long odds and need someone on their side again.

That is why I love this country.

And in my own life, in my own small way, I’ve tried to give back to this country that has given me so much. That’s why I left a job at a law firm for a career in public service, working to empower young people to volunteer in their communities. Because I believe that each of us – no matter what our age or background or walk of life – each of us has something to contribute to the life of this nation.

It’s a belief Barack shares – a belief at the heart of his life’s work.

It’s what he did all those years ago, on the streets of Chicago, setting up job training to get people back to work and after-school programs to keep kids safe – working block by block to help people lift up their families.

It’s what he did in the Illinois Senate, moving people from welfare to jobs, passing tax cuts for hard-working families, and making sure women get equal pay for equal work.

It’s what he’s done in the United States Senate, fighting to ensure the men and women who serve this country are welcomed home not just with medals and parades but with good jobs and benefits and health care – including mental health care.

That’s why he’s running – to end the war in Iraq responsibly, to build an economy that lifts every family, to make health care available for every American, and to make sure every child in this nation gets a world class education all the way from preschool to college. That’s what Barack Obama will do as president of the United States of America.

He’ll achieve these goals the same way he always has – by bringing us together and reminding us how much we share and how alike we really are. You see, Barack doesn’t care where you’re from, or what your background is, or what party – if any – you belong to. That’s not how he sees the world. He knows that thread that connects us – our belief in America’s promise, our commitment to our children’s future – is strong enough to hold us together as one nation even when we disagree.

It was strong enough to bring hope to those neighborhoods in Chicago.

It was strong enough to bring hope to the mother he met worried about her child in Iraq; hope to the man who’s unemployed, but can’t afford gas to find a job; hope to the student working nights to pay for her sister’s health care, sleeping just a few hours a day.

And it was strong enough to bring hope to people who came out on a cold Iowa night and became the first voices in this chorus for change that’s been echoed by millions of Americans from every corner of this nation.

And in the end, after all that’s happened these past 19 months, the Barack Obama I know today is the same man I fell in love with 19 years ago. He’s the same man who drove me and our new baby daughter home from the hospital 10 years ago this summer, inching along at a snail’s pace, peering anxiously at us in the rearview mirror, feeling the whole weight of her future in his hands, determined to give her everything he’d struggled so hard for himself, determined to give her what he never had: the affirming embrace of a father’s love.

And as I tuck that little girl and her little sister into bed at night, I think about how one day, they’ll have families of their own. And one day, they – and your sons and daughters – will tell their own children about what we did together in this election. They’ll tell them how this time, we listened to our hopes, instead of our fears. How this time, we decided to stop doubting and to start dreaming. How this time, in this great country – where a girl from the South Side of Chicago can go to college and law school, and the son of a single mother from Hawaii can go all the way to the White House – we committed ourselves to building the world as it should be.

So tonight, in honor of my father’s memory and my daughters’ future – out of gratitude to those whose triumphs we mark this week, and those whose everyday sacrifices have brought us to this moment – let us devote ourselves to finishing their work; let us work together to fulfill their hopes; and let us stand together to elect Barack Obama president of the United States of America.