Now a few questions about the decision to use a private server.

“The Federal Records Act requires the head of each agency to “make and preserve records containing adequate and proper documentation of the organization, functions, policies, decisions, procedures, and essential transactions of the agency and designed to furnish the information necessary to protect the legal and financial rights of the Government and of persons directly affected by the agency’s activities.”

We have a few questions regarding the keeping and storing of records and the Secretary’s compliance with the law.

Watch for more questions about Hillary Clinton’s email scandals and other past “mistakes”! She doesn’t like answering questions and that only makes us want to ask more. 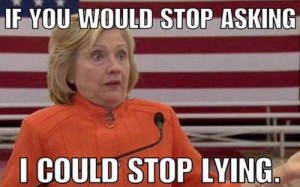