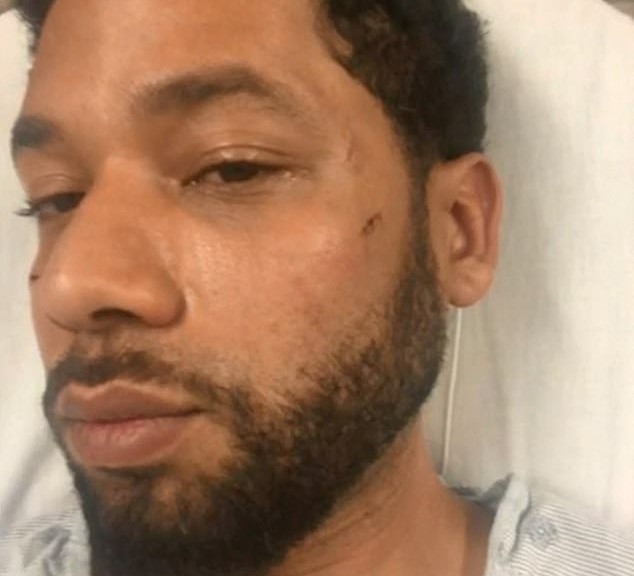 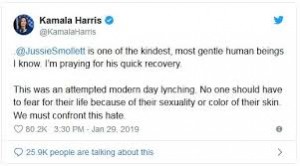 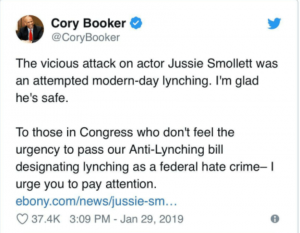 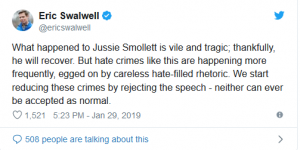 California Congressman Eric Swalwell is right that what happened is vile. And I’ll agree that “hate crimes like this are happening more” in that hoaxes that pretend to be hate crimes seem to be fairly frequent. But, what are you going to do? If Trump supporters don’t actually care that you’re black or gay or a thousand other things you want attention for, you gotta fake it. 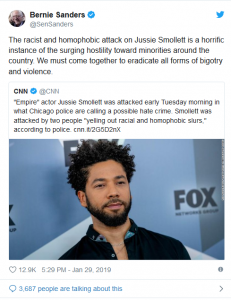 Bernie has to comment, he’s trying to stay relevant. 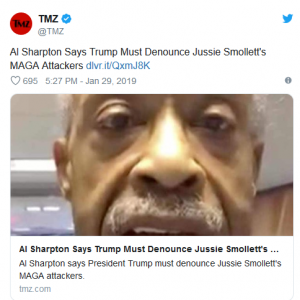 Do you think Sharpton had Tawana Brawley flashbacks? 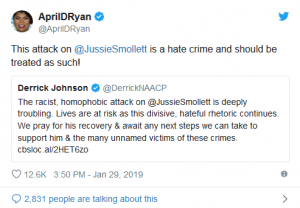 This woman is a White House correspondent for CNN. If she is concerned about “divisive, hateful rhetoric” she should stop tweeting. Last year she tweeted a link to an article whose headline asked if the Trump administration was running a child trafficking ring. She has repeatedly tweeted innuendos and lies in order to smear Trump.

It didn’t spark much response because most people with any wits at all knew it was an unlikely story from the beginning. Two Trump supporters wandering around Chicago wearing MAGA hats? And they just happened to be carrying bleach and a rope, in sub-freezing weather, just in case they ran into a black, gay celebrity.

The most unlikely bit of it all was that these imaginary Trump supporters recognized Smollett. I guess his ego makes him think that everyone would. 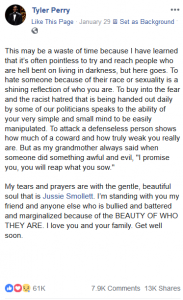 I hope he’s right about reaping what you sow. 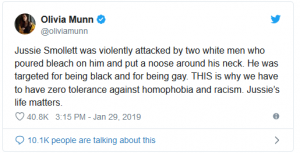 THIS is why we have to have zero tolerance for hoaxes.

Racism and homophobia exists, but one of the biggest things keeping them alive is stupid hoaxes. This is a great way to make sure the real victims won’t be believed.

I wonder if he now wants Smollett and all Nigerians to burn in hell.

OMG!! How about protecting them from idiots who try to subvert a cause in order to promote themselves and their career?

I agree with the sentiment, this outrageous criminal hoax should be denounced by everyone on the Left immediately. 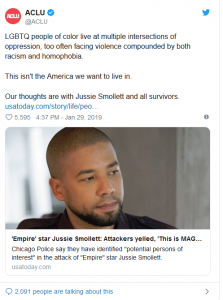 This isn’t the America we want to live in. Our thoughts are will all the victims of false accusations and hoaxes.