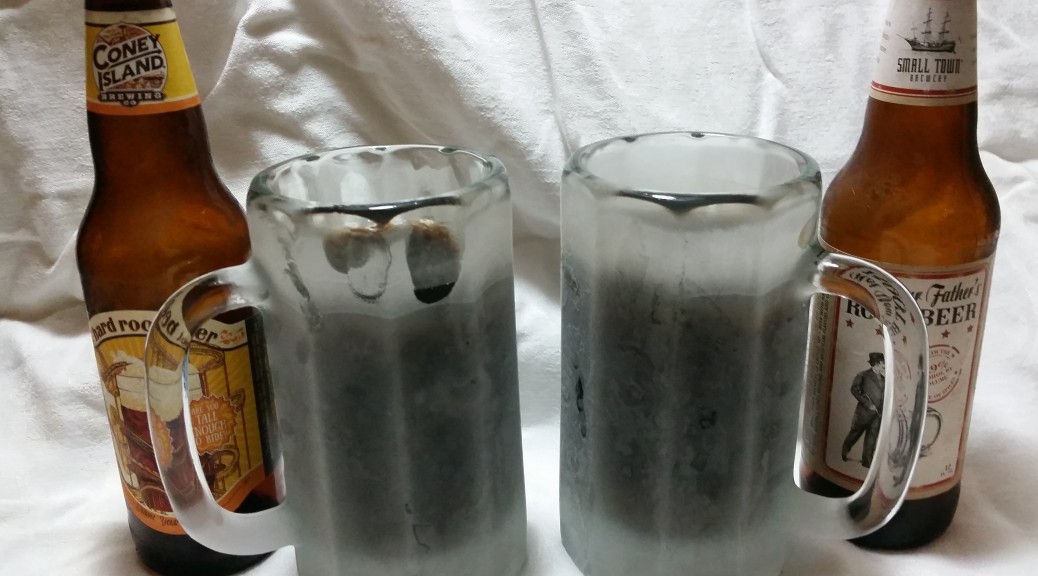 We tried two brands of hard root beer that are available in my area – Not Your Father’s Root Beer and Coney Island Hard Root Beer.

When we poured the Not Your Father’s Root Beer (NYFRB) into the mug, the head disappeared within a few seconds. It had a nice vanilla scent and flavor, followed by light spices. It tasted like root beer. There was a light alcoholy after taste, but that problem was solved by taking several more swigs.

NYFRB has a 5.9% alcohol content. It’s very smooth, not too fizzy, but it still made me burp, so there had to be some carbonation left, right? It is made by Small Town Brewery and distributed by Paabst. Although the location finder they have on their site showed on a few places near me where it’s available, I’ve seen it in my local grocery and liquor stores.

To another taster, NYFRB tasted like sasparilla with alcohol. A fourth said it tasted like bubblegum. (He’d been drinking other alcoholic beverages before the taste test so he might not be the most reliable judge.

The head on the Coney Island Hard Root Beer (CIHRB) also disappeared quickly after pouring. It had a spicier flavor, kind of a wintergreen. (My other taster compared it to the smell of Icy Hot patches, but in a good way.) We didn’t notice an alcohol taste at all with this one.

CIHRB is 5.8% alcohol. It’s brewed by Coney Island Lager which is owned by Samual Adams. It has a sweet syrupy taste, but one taster compared it to A&W with hairspray. He had also been drinking beforehand and I don’t know how he knows what hairspray tastes like anyway. 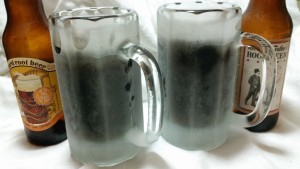 The four of us were evenly split over which of the two was better. Kind of. One taster liked the CIHRB best but only in limited quantities – having one with a pizza, for example. If he were going to drink a lot of hard root beer, he would go with the NYFRB since it is less sweet.

If I find other hard root beers in my area, I’ll add tasting notes for them too.